Deadly brain tumour rates rise in US and Europe – cell phones to blame?


Deadly brain tumour rates on the increase in the UK, US, Denmark, Netherlands and Sweden, is it attributable to mobile phones?

A simple question posed by the telecommunications industries and its regulators is oft quoted “if exposure to mobile phone frequencies causes cancer, why are cancer rates falling?” In 2017 this question was slowly beginning being answered and its implications are deeply worrying. Whilst the total number of cancers are falling in some countries, certain ‘rare’ types of brain tumours are rising and these tumours are associated with studies looking at the usage of mobile phones.

Rates of glioblastoma multiforme, an aggressive and deadly form of brain tumour, are increasing in the UK, US, Netherlands, Sweden, and Denmark. This is ominous because as in smoking and cancer induction, a certain time span is required before cancer sets in the body and is recognised as such by medical and scientific bodies. No one is really sure on the latency period between exposure to microwave radiation emitted from cell phone and WIFI router antennas and the induction of carcinogenic processes within the body.

Maybe it is between 15 – 25 years for heavy users and God-knows how long for casual users. The real point of this article is that these data are starting to come in from all corners of the globe and these epidemiological and medical studies are all statistically significant. In other words, these data show causal effect and are not due to chance or probability.

Figure 1 shows various regions of one side of the head which comes into intimate contact with microwave radiation from mobile phone usage. 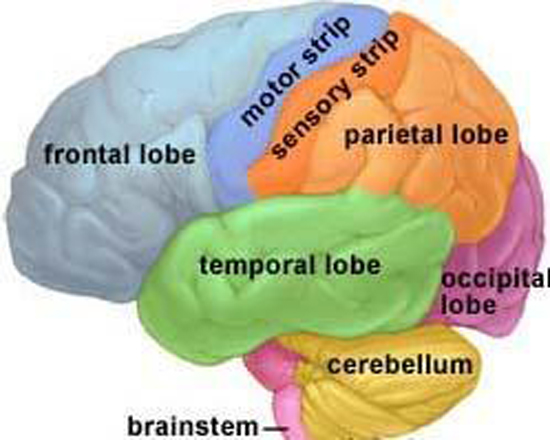 The list below gives a breakdown on properties of brain tumours associated with the use of mobile phones. Brain tumours are abnormal tissue that grows from certain types of body cells. Tumours can also be called lesions and are either benign or malignant. In general terms, benign tumours grow slowly whilst malignant tumours grow quickly. Because brain tumours grow within a bony skull enclosure in which there is no room for growth, all of these types of tumour are life-threatening.

• Gliomas: most common types of malignant brain tumours usually found in the frontal and temporal lobes of the brain
• Glioblastoma multiforme: most virulent and deadly type of brain tumour
• Neoplasms of the parietal lobe and temporal lobes
• Meningioma: most common (mostly) benign tumour that usually develop in layers of tissue that surround and protect the brain and spinal cord
• Acoustic neoplasms: tumours that grow in the inner ear close to the brain and in removing these types of tumours, it is necessary to remove the acoustic nerve resulting in deafness in that ear.

To answer the question posed in the first sentence of this article, look at Figure 2, which is data derived from a long term study of tumour data (1989 -2010) from the Netherlands. 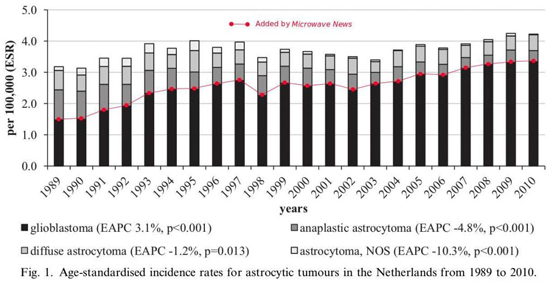 At first glance, the height of the bars has remained roughly the same between 1989 and 2010. This suggests that during this period, there has been a steady diagnosis of 3 or 4 new tumour cases per 100,000 of the Dutch population per year. This is how the mainstream media and the scientists who work for the telecommunications industries report data.

However, significantly and ‘lost’ within this data, is the increase of the most virulent and deadly of the brain tumours, glioblastoma multiforme, as shown by the red line on the graph. If we analyse the data by tumour type, we can see that whilst the number of overall tumours remains steady, the incidence of glioblastomas increases by between 2 and 3.5% per year and this is statistically significant. Glioblastomas are associated with heavy usage of mobile phones. It is the rate of change, both positive and negative, for each tumour type per year that tells the real story of what is unfolding, not the total number of recorded tumour cases.

This trend was also seen in the US by researchers from the Southern Californian Medical School who analysed the incident of brain tumours over a 15 year period with data collected from three central cancer registries. The data showed “decreased rates of primary brain tumours in all sites with the notable exception of increased incidence of glioblastomas multiforme in the frontal lobes, temporal lobes and cerebellum.” Statistically significant increases per year were determined ranging from 1.5 – 3%.

Data from a Danish cohort study in 2012 also found that the incidence of glioblastoma multiforme had doubled in a ten year period. This data has since been removed from the website of the Danish Cancer Society. You can draw your own conclusions why they would do this.

In 2011, the International Agency for Cancer Research (IARC), a scientific body of the World Health Organisation, defined exposure to microwave radiation as a Class 2B carcinogen i.e. “possibly carcinogenic”.

One of the researchers from that panel, Hardell, who argued for this cancer classification, had this to say, “we have consistently found an increased risk for high grade gliomas, including the most malignant type, glioblastoma multiforme (IV) and use of wireless phones”. Other epidemiological studies he was involved with show that of 1678 patients with glioblastoma multiforme, those who used wireless phones had shorter survival times.

Something very rotten is occurring in Sweden: “Some leading epidemiologists have been saying that cell phones don’t pose a brain tumor risk because cancer rates are not going up. Now comes word that Swedish cancer registry data are in disarray and official statistics may be masking a disquieting trend. Since 2008, there has been a close to 30% increase in patients with a brain tumor of an ‘unknown nature’ and that increase is not reflected in the national cancer registry, according to a new analysis by Mona Nilsson, a Swedish journalist and the chairman of the Swedish Radiation Protection Foundation.

Yet, Nilsson adds, ‘the number of patients reported dead of brain tumors with a confirmed diagnosis declined’ during that same period.”

Sweden was one of the first European countries to adopt mobile phone technology and clearly, what happens there is a fore-taste of what will occur elsewhere. In fact, Sweden and Denmark are the countries to watch as this drama of exposure and deadly harm unfolds within those segments of humanity habitually using mobile phones and other microwave-enabled gadgets.

Vocht merely comments that “A causal factor, of which mobile phone use (and possibly other wireless equipment) is in agreement with the hypothesized temporal association, is related to an increased risk of developing malignant neoplasms in the temporal lobe.”

Trevor Philips of PowerWatch analysed the raw data and found the wrong data had been used in this study. The lead researcher, Vocht said that a ‘mis-communication issue’ had arisen between him and the data provider. Vocht subsequently had to issue a ‘corrigendum’ or ‘correction in print’ to his study because he used the wrong data. 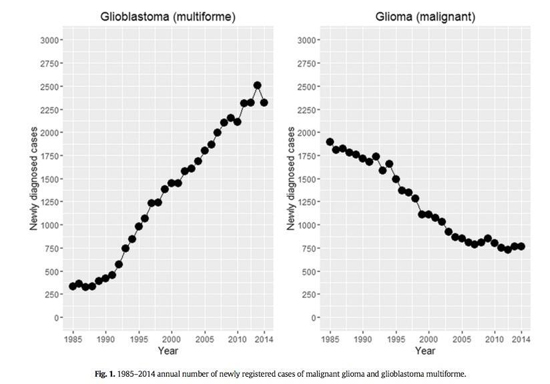 It is clear, contrary to the belief held by the telecommunications industries and its regulators, that exposure to microwave radiation is capable of initiating carcinogenic (cancer-causing) processes within our biology. There is also ample evidence that exposure to non-thermal levels of microwave radiation is genotoxic. Time is running out for those who believe that non-ionising radiation is safe i.e. the telecommunications industries and their governmental regulators.

People are close to the latency period at which cancers and tumours have had time to develop and the trend discussed above could either develop into a ‘tsunami’ of brain tumour increases or they could take longer to develop – either scenario is too frightening to contemplate.

One piece of good news is that there is one study on these issues that will generate much interest. This study was carried out by the National Toxicology Programme (NTP), which is staffed and funded by the US government. In terms of its toxicological science, the NTP is seen as a world leader and deemed a ‘gold standard’ in these types of studies.

Nonetheless, even here, the study itself took 17 years to complete and was dogged by controversy and overspend. It has taken a long time to get this study’s results into peer review and it is still continuing but initial results and conclusions from this work show clear initiation of cancers in rats exposed to microwave radiation compared to rats that were not exposed. These data and conclusions will eventually shake the very foundations of institutions such as the International Commission on Non Ionising Radiation and Protection because it is their exposure advice that the US Federal Communications Commission (FCC) and Public Health England (UK) defer when re-assuring its citizens that mobile phone technologies are safe.

Details of the NTP study and partial findings and tentative conclusions can be found here.

12 Methods To Unplug From The Matrix (1)