The human papillomavirus (HPV) vaccine was originally approved by the U.S. Food and Drug Administration (FDA) in 2006, and was introduced to the public as a vaccine that could protect women against the two strains of the HPV virus, HPV 16 and HPV 18, believed to be responsible for 70% of all cases of cervical cancer.

However, although the HPV vaccine was originally designed to protect women and young girls against the HPV virus, the media and governments from around the world often refer to it as the “cervical cancer vaccine,” which is incorrect, because there is little evidence to support their claim. 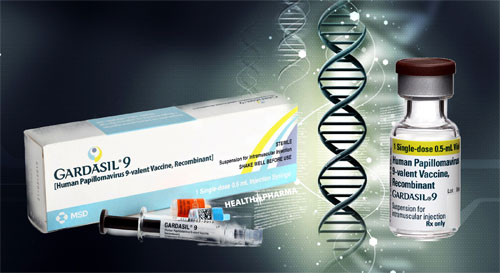 The World Health Organization Says the HPV Vaccine is Safe, Therefore It Must Be

According to WHO, the HPV vaccination is extremely safe. Using data provided to them by The Global Advisory Committee on Vaccine Safety (GACVS), they stated that: “Since licensure in 2006, over 270 million doses of HPV vaccines have been distributed. GACVS first reviewed the safety data in 2007, and subsequently in 2008, 2009, 2013, 2014, and 2015. Early on, the Committee was presented signals related to anaphylaxis and syncope. The risk of anaphylaxis has been characterized as approximately 1.7 cases per million doses, and syncope was established as a common anxiety or stress-related reaction to the injection. No other adverse reactions have been identified and GACVS considers HPV vaccines to be extremely safe.”

They stated that: “Where HPV vaccination programmes have been implemented effectively, the benefits are already very apparent. Several countries that have introduced HPV vaccines to their immunization programme have reported a 50% decrease in the incidence rate of uterine cervix precancerous lesions among younger women. In contrast, the mortality rate from cervical cancer in Japan, where HPV vaccination is not proactively recommended, increased by 3.4% from 1995 to 2005 and is expected to increase by 5.9% from 2005 to 2015. This acceleration in disease burden is particularly evident among women aged 15–44 years. Ten years after introduction, global HPV vaccine uptake remains slow, and the countries that are most at risk for cervical cancer are those least likely to have introduced the vaccine. Since licensure of HPV vaccines, GACVS has found no new adverse events of concern based on many very large, high quality studies. The new data presented at this meeting have strengthened this position.”

The wording in the above paragraph is extremely interesting, especially where GACVS stated that: “In contrast, the mortality rate from cervical cancer in Japan, where HPV vaccination is not proactively recommended, increased by 3.4% from 1995 to 2005 and is expected to increase by 5.9% from 2005 to 2015.”
This is because the HPV vaccination was not approved by the FDA until 2006. Therefore, it appears that, according to GACVS, they were expecting the death rate from cervical cancer to rise significantly in a country where they have admitted that the vaccination has not been proactively recommended… but nevertheless is being used. This significant rise appears after the vaccination was approved for use.

The CDC and FDA Also State That HPV Vaccinations Are Safe

Like WHO, the CDC has also stated on their website that the HPV vaccination is safe and effective. The CDC wrote on their website:
“HPV Vaccine Safety
The human papillomavirus (HPV) vaccines are safe, effective, and offer long-lasting protection against cancers caused by HPV.”

They explained that each of the HPV vaccinations have been through extensive safety testing before they were licensed and stated that:
“… As with all approved vaccines, CDC and the FDA closely monitor the safety of HPV vaccines after they are licensed. Any problems detected with these vaccines will be reported to health officials, health care providers, and the public.”

The FDA wrote a similar statement on their website, although their statement was based solely on the Gardasil vaccine, the HPV vaccination manufactured by Merck. They stated that: “Based on the review of available information by FDA and CDC, Gardasil continues to be safe and effective, and its benefits continue to outweigh its risks. CDC has not changed its recommendations for use of Gardasil. FDA has not made any changes to the prescribing information for how the vaccine is used. In addition, FDA routinely reviews manufacturing information, and has not identified any issues affecting the safety, purity and potency of Gardasil.”

They continued that: “Public health and safety are priorities for FDA and CDC. As with all licensed vaccines, we will continue to closely monitor the safety of Gardasil. FDA and CDC continue to find that Gardasil is a safe and effective vaccine that will potentially benefit the health of millions of women by providing protection against the types of HPV in the vaccine that cause cervical, vulvar and vaginal cancer, genital warts, and other HPV-related genital diseases in females.”

In other words, the websites of WHO, CDC, and FDA, three main websites that parents and professionals use to research information on vaccination safety, have stated categorically that the HPV vaccination is both safe and effective.
However, the HPV vaccine appears to be anything but safe.

WHO’s Own Database Lists Tens of Thousands of Adverse Reactions

What you can uncovered is a minefield of what is extremely worrying information, especially when you consider the fact that, according to the main WHO website, the HPV vaccine is an extremely safe and effective vaccine. 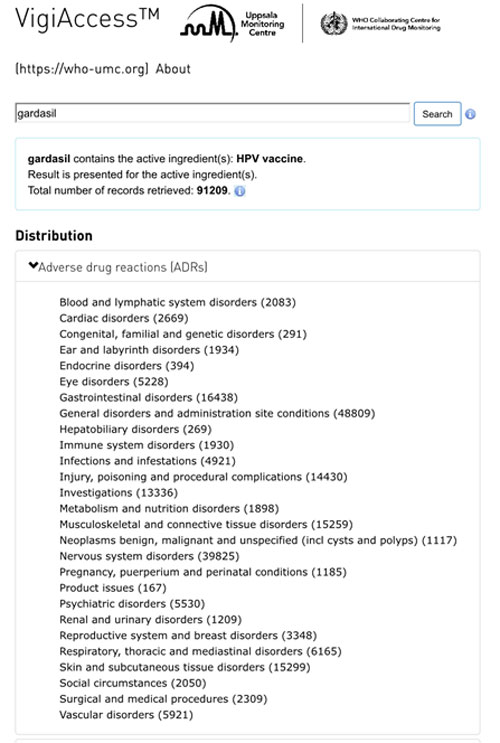 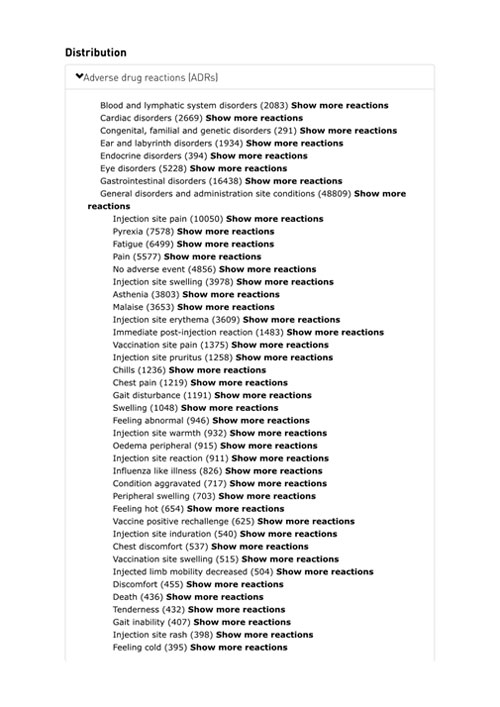 Parents and Professionals Speak Out in Award-Winning Documentary

Filmmakers portrayed a powerful historical link between the hundreds of thousands of virgins who had been sacrificed for the greater good throughout history and modern-day virgins, young girls vaccinated with the HPV jab before they had become sexually active.
The film portrayed powerful connotations from the onset.

Part one, titled “Sacrificial Virgins – Not for the Greater Good,” opened with powerful footage of Ruby Shallom, a once-active 16-year-old, who, according to filmmakers, had been left almost totally paralyzed after she had received her first dose of the HPV vaccine, a vaccine which, according to the film’s narrator, boasts the highest number of adverse reactions of any vaccine in the UK, a statement supported with a chart.

To highlight just how many girls in the UK, have been injured by the HPV vaccine, in comparison to other vaccinations, the UK Association of HPV Vaccine Injured Daughters (AHVID), supplied this image: 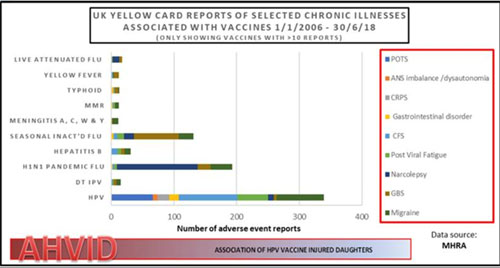 They continued by showing a collage of children and young adults that they say had been injured by the HPV vaccination, a vaccine which, again, according to WHO, the CDC and the FDA, is extremely safe and effective.

Not only did the filmmakers interview many of the victims injured by this vaccine, but they also interviewed many leading professionals who gave factual evidence to support their claim that this vaccine is indeed unsafe.

Shenton’s film was such a success that, for the first time ever, their documentary series won a special jury prize for World Social Impact at the Queens World Film Festival (QWFF) in Queens, New York.
This success was a testament to everyone who had worked so hard to make this documentary and to all of the injured children and adults who were brave enough to speak out about their injuries.

Shenton was asked what action she would like to see governments take in regards the HPV vaccine. She told that: “I am not a scientist, but I echo the statements below from doctors and scientists. My personal view, after meeting and speaking to so many victims of the HPV vaccination and their parents, is that the vaccinations should be withdrawn immediately.”

Dr. Christian Fiala, socialist in obstetrics and gynecology, said: “No one has shown that the HPV vaccine actually reduces the rate of cervical cancer.”

Professor Peter Duesberg, molecular biologist, stated: “Of course it should be stopped until they have proved that it protects against cancer.”

Dr. Hirokuni Beppu, neurologist, explained: “It is not useful. The HPV vaccine is useless because it has a very low risk benefit balance and we cannot differentiate those people who have risk to this vaccine.”

These are strong words from Shenton and other experts; words necessary to be taken seriously.

AI Can Hate With No Human Input