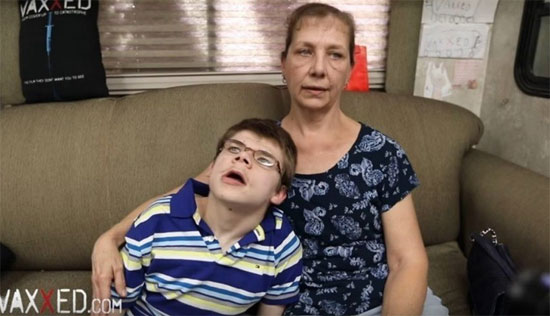 The VAXXED team interviewed a mother from New Jersey, now living in Florida, about her vaccine-damaged son. Her son has brain injuries, and initially she was accused of Shaken Baby Syndrome (SBS). They removed her other child from her home, and tried to get her to confess to a crime she never committed.

Her son almost died, and at one point they encouraged her and her husband to just donate his organs.
But he pulled through, and with the use of alternative therapies such as hyperbaric oxygen therapy and medical cannabis (CBD oil), he has seen significant improvement.

Here is their story:

Normal Birth and Baby Prior to Vaccines

A New Jersey mother relates how her son was born normal, and healthy. Like almost all babies born in hospitals in the U.S., he received the Hepatitis B vaccine on the day he was born.
He received a second Hepatitis B vaccination at 1 month old. After that, she relates how her son began arching his back and rolling on his side with his “eyes going back into his head”.

When she took him to the doctor, she expressed her concern about the apparent side effects from the 1-month vaccines, but her doctor allegedly dismissed her concerns, and the baby received another full round of vaccines at age 2 months. This included the oral polio vaccine, a vaccine no longer used in the U.S. due to serious side effects.

After the 2 month vaccines, her son began projectile vomiting. Her babysitter called her at work one day but she was unable to get to the call. When she picked the baby up, she relates that he was very lethargic and dehydrated. She got him to drink about 4 oz. through the night, and called her pediatrician in the morning.

The doctor said it was probably the flu, and that there was no need to bring him in.
About 15 minutes after hanging up the phone with their doctor, she relates how her son had something like a “grand mal seizure”.
She called her husband and asked him to come home from work, because she also had an active 4 year old in the house. She also called the doctor’s office back, but they said they could not fit him in until later in the day.

When her husband arrived and saw the condition of their son, they went to a kind of urgent care center nearby.
Having another apparent seizure at the emergency center, a doctor suspected meningitis and treated him for that. The doctor and two nurses then called an ambulance to take him to a hospital that had a trauma center, New Brunswick, New Jersey, Robert Wood Johnson University Hospital.

Driving with her husband to Robert Wood Johnson Hospital, they lost sight of the ambulance. Once they arrived and went to the emergency room, they learned that the ambulance never made it there. It went to a different hospital, Saint Peter’s University Hospital, which was closer, because their son had reportedly “coded” and stopped breathing in the ambulance.

After they stabilized him at Saint Peter’s Hospital, the pediatrician she had talked to earlier in the morning, who had told her it was not necessary to bring him in to his office, showed up at the emergency room and allegedly asked the mother: “What happened?”
She replied that the only thing she knew “happened” was that he had just received a round of vaccines in his office 10 days earlier.
He replied: “Vaccines wouldn’t do this.”

The baby was later transferred to Robert Wood Johnson hospital, where they did a CT Scan. The scan showed massive bleeding on the brain.
The doctor in the pediatric ICU then told the mother that she needed to call her husband back, because they need to “have a talk”.
They explained to her and her husband that “someone did this to him” like someone hitting him in the head with a baseball bat.
The mom explained that this clearly did not happen.

Her son was put on life support and child social services were called in, along with local police and the prosecutor’s office.
The next day two detectives and two social workers escorted her out of the hospital, where she had been staying all night watching her son on life support. She had not eaten all day yet, and it was in the cold of January, as they walked down the snowy streets from the hospital to a place where they questioned her for 5 hours, trying to get her to confess to injuring her son. They claimed she must have “shook him” to cause such injuries.

The family had to hire a criminal defense attorney, and their 4 year old child was removed from their home by social services (DCF).
The mother was not comfortable with the doctors’ diagnosis of “Shaken Baby Syndrome”. She knew that she had never shaken him, and she did not believe anyone else had either. There were never any external signs of abuse (think of what would be visible on the head if someone had actually hit him with a baseball bat, for example, as one doctor suggested).

As they cooperated with the investigation, after about two weeks doctors told her they wanted to send a sample of his blood out for testing, as they allegedly wanted to check for something “very rare” that they had “never seen before”. It appeared that the doctors had no idea what was causing his condition at this point.

Mom Turns to Other Doctors for Help

Meanwhile, mom began doing her own research, and contacted a few neurosurgeons for advice.
A neurosurgeon in Dallas apparently took interest in the case, and asked the mother to send him the CT scans. In the absence of any external evidence, such as broken bones, swelling, etc. the doctor reportedly wanted to further investigate.
After viewing the CT scans, the doctor reportedly called the mother and her attorney up, and reported that there was no evidence at all of abuse or Shaken Baby Syndrome. He advised the family to transfer their son out of Robert Wood Johnson Hospital where he could get better care.

They chose a hospital in Newark, NJ, but the doctors at Robert Wood Johnson were opposed to it, holding firm to a diagnosis of SBS. They had scheduled her son for surgery the next morning.
The mom refused, and when the staff asked her what she was going to do about it, she said she was going to come and take her son to the new hospital herself. They ended up granting the transfer. Apparently, because she was not taking him across state lines, the laws in New Jersey allowed her to make this transfer.

Her son was eventually put into rehab therapy, due to the significance of his brain injury. There was still no diagnosis other than SBS. The link to vaccines did not come until some years later.
The mother became very involved with the SBS issue, and soon found evidence of vaccine injuries causing symptoms that appear as SBS.
Watch the entire interview, including how medical professionals tried to convince the parents that their son was “brain dead” and that they should just donate his organs. Using alternative therapies, such as hyperbaric oxygen therapy and medical cannabis (CBD oil), they are seeing huge improvements in their son.