Anomalies have been documented for centuries, and while many odd events or unusual artifacts have been explained over the years, strange happenings continue to incite controversy and imagination. Historians and archaeologists often unearth objects and information they do not expect – and sometimes these discoveries are bizarre, baffling, or at least controversial. 2016 is no exception. Extra-terrestrials, elongated skulls, ghostly happenings, ancient advanced civilizations, the Bermuda Triangle, and weird artifacts – these are some of the topics that made you wonder, shiver, or laugh, as they created a buzz and debate around the world. Read on for the Top 10 of these finds in 2016!

10. Norwegian Scientists Unintentionally Provide Fuel for a Fringe Theory on the Bermuda Triangle Scientists in Norway made waves in March with an announcement that unintentionally linked giant craters in the Barents Sea to the controversial Bermuda Triangle. They said that the craters could have been created by exploding natural gas, which some others say has the possibility of being dangerous for ships. The international media ran rampant with the idea and connected it to a fringe theory explaining the odd occurrences in the Bermuda Triangle.

Although the Norwegian scientists did not make these claims, the notion that a sudden release of methane gas could potentially endanger ships, or even bring down aircraft, is not new – May and Monaghan, the Russian scientist Igor Yeltsov, and some others toyed with the idea in the last few decades. For example, in 2003, May and Monaghan suggested that the methane bubbles could sink ships – depending on the location of the ship to the gas bubble. As for aircraft, National Geographic has previously reported that “methane can escape into the air, making the atmosphere highly turbulent and perhaps causing aircraft to crash.” 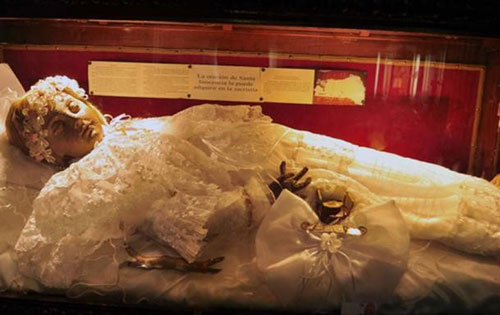 In September, rumors surged in the media about paranormal events surrounding a young Catholic saint in Guadalajara, Mexico. Called Santa Inocencia, the deceased martyr is said to have opened her eyes and looked into the camera of a tourist visiting her in the Guadalajara Cathedral.

The supposed event is said to have taken place on December 12, 2012 when an [unnamed] person took the video of the corpse with his/her cellphone and was able to capture the little girl opening her eyes. Even though the person says that they didn’t see it while recording, while viewing the video with his/her family they could see the corpse clearly open her eyes in front of the camera. Speaking on the story, Cardinal Juan Francisco Robles apparently told La Obscura Habitacion: “This beatified saint is known for making miracles, and this is just one of the many”.

8. Was This Giant Stone Sphere Crafted by an Advanced Civilization of the Past or the Forces of Nature? 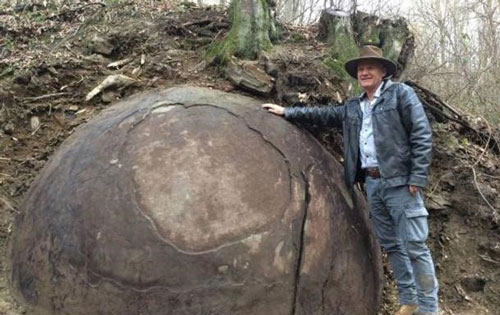 A huge stone sphere discovered in mid-March 2016 in Bosnia may be the largest of its kind in the world, however there is much debate if the feature is man-made or natural. The stone ball was discovered in a forest in Podubravlje and has a radius of between 1.2-1.5 meters (3.9-4.9 ft.). Preliminary tests suggest that it could weigh over 30 tons, making it the most massive stone sphere in Europe.

Signs of natural sedimentation are found over the sphere and Dr. Osmanagich asserts that “It takes tens, even hundreds of thousands of years for this sediment to form”. However, some critics have also emerged saying: “The sphere in fact, may not be man-made at all. Describing the process of ‘concretion’ […] the sphere could have been formed due to precipitation of natural mineral cement within the spaces between sediment grains.”

7. More Evidence that Ancient Romans May Have Made It to Oak Island, Canada 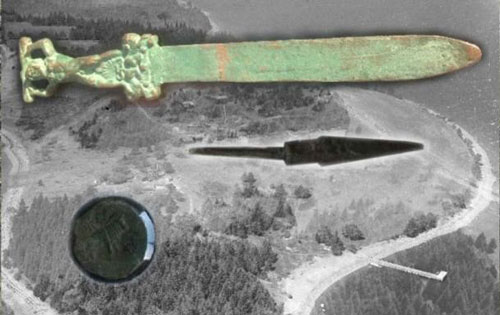 What appears to be an ancient Roman sword was found off the East Coast of Canada, but it is just one of several indications that Romans may have been there around the 2nd century or earlier. That’s at least 800 years before the Vikings landed, which is currently believed to be the first contact between the Old World and the New World.

The sword was discovered off the coast of Oak Island, Nova Scotia, during investigations into local lore of treasure buried on the island, conducted as part of a History Channel show, The Curse of Oak Island. Although the sword alone doesn’t mean Romans were there, other artifacts have been found at the site as well including a stone with an ancient language connected to the Roman Empire, burial mounds in the ancient Roman style, crossbow bolts reportedly confirmed by U.S. government labs to have come from ancient Iberia (encompassed by the Roman Empire), coins connected to the Roman Empire, and more.

6. The Truth About Father Crespi and His Missing Artifacts Finally Revealed 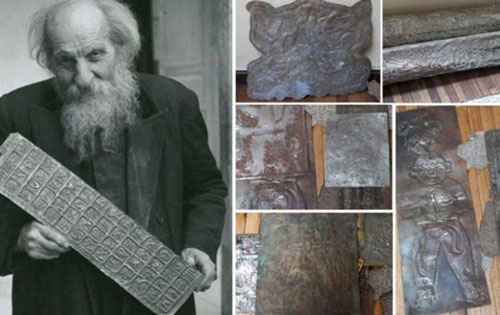 The story of Father Crespi is a mysterious and controversial account of a priest in Ecuador involving some extravagant claims. While his story has clearly been sensationalized, dramatized, and falsified over the decades, there does remain a genuine mystery about a small number of his artifacts.

Ancient Origins set out to find some answers and was given exclusive access to the private collection of Father Crespi. In the Central Bank museum, rows upon rows containing thousands of artifacts awaited. They had been carefully catalogued according to their age and the culture they had belonged to – figurines, ceremonial seats, weapons, stone carvings, ceramics, jewelry, ancient calculation systems, religious icons, and even elongated skulls and shrunken human heads, but there were no metallic plates in sight.

The plates were considered as junk by the Central Bank, who refused to purchase them. They were found at the opposite end of the building complex in a locked storage area of a dilapidated old building where they were strewn all over the floor, thrown in cardboard boxes, and gathered in miscellaneous piles. It was clear that no value was ascribed to them. 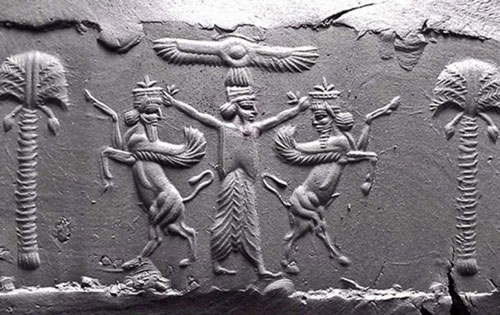 The Minister for Transport in Iraq made a controversial speech at the inauguration of a new airport in southern Dhi Qar in October, in which he stated that ancient Sumerians built the first airports 7,000 years ago and launched spaceships from there to explore other planets. He also claimed that all the world’s angels were Sumerian. To support his claims, he referred to the work of Samuel Kramer, Russian professor and Sumerian expert, who highlighted the Sumerians’ advanced understanding of the cosmos.

While no one in the audience questioned the Minister at the time, listeners were quick to jump to social media to rubbish his claims and criticize the incompetence of the government. Nevertheless, the Minister does have a number of supporters among ancient astronaut theorists, who argue that intelligent extra-terrestrial beings visited Earth and made contact with humans in antiquity, with many believing that ancient Sumer was the first place in which contact was made. 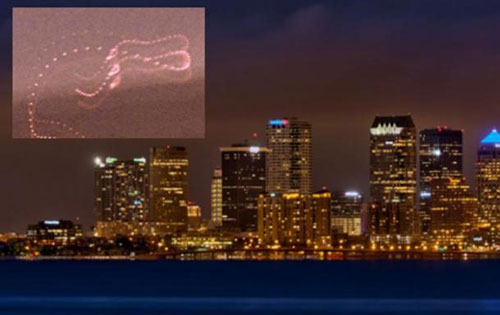 A report published in the American Journal of Modern Physics revealed a startling find – a newly developed telescope with concave lenses has observed, for the first time, entities in our terrestrial environment that are invisible to our eyes and to conventional Galileo telescopes with convex lenses. Even more surprising is the fact that these entities have been observed to move ‘intelligently’ in the night sky in a manner suggesting unauthorized surveillance of the area.

Using a pair of Galileo and Santilli telescopes, Dr Santilli found the first known evidence of the apparent existence in our universe of antimatter galaxies, antimatter asteroids, and antimatter cosmic rays. But that’s not all – as Dr Santilli carried out systematic tests and observations, he came to identify two different types of Invisible Terrestrial Entities (ITEs). Both types have been independently verified by colleagues. 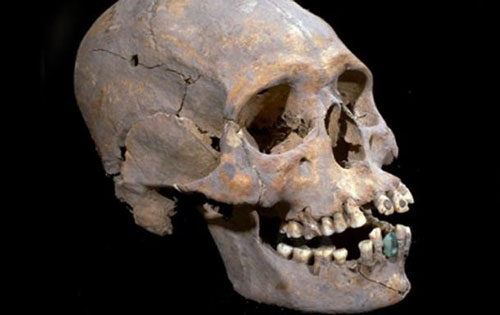 In July, archaeologists in Mexico unearthed a remarkable burial in the ancient ruins of Teotihuacan containing a 1,600-year-old skeleton of an upper-class woman with an elongated skull, stone encrusted teeth and a prosthetic tooth made of a green stone known as serpentine. She was buried with 19 jars of offerings.

The woman, who was between 35 and 40 years old when she died, was said to be a foreigner to the area as the way in which her skull had been deformed and her teeth encrusted with mineral stones was not usual for that region. It was said that her cranium had been elongated by being compressed in a “very extreme” manner with a technique commonly used in the southern part of Mesoamerica. Two round pyrite stones were encrusted in her top front teeth. This was also a practice that was used among the nobility in Maya regions in southern Mexico and Central America.

2. Dead Seas Scrolls Reveal that Noah’s Ark Was Shaped Like a Pyramid 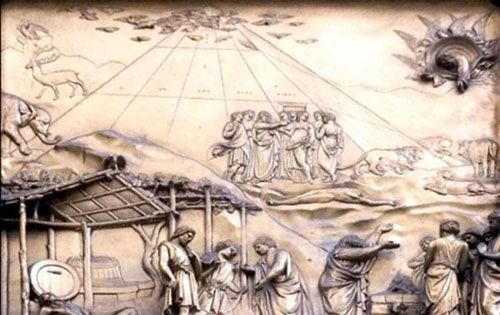 A reading from a newly digitized fragment of the Dead Sea Scrolls suggests that Noah’s Ark was something different than what is currently believed. The 2,000-year-old text may prove that the Ark was in the shape of a pyramid. After almost five years, a laboratory has scanned tens of thousands of fragments from the scrolls.

Each fragment was photographed 28 times at high resolution using different wavelengths of light. The sophisticated technology enabled researchers to read letters and words that were previously illegible. Some of the newly-digitized fragments offered new interpretations of well-known Biblical stories. Thanks to the high-resolution imagery, a word was read following the phrase “the ark’s tallness” – “ne’esefet”, meaning “gathered” which according to researcher Dr. Alexey Yuditsky means that the ark’s ribs were gathered together at the top in the shape of a pyramid. Dr Yuditsky said that the Septuagint, a Greek translation of the Bible dating to the 3rd century BC, used a Greek verb with a similar meaning to describe the Ark. Moreover, medieval authors like Maimonides suggested that the ark’s roof was pointed. 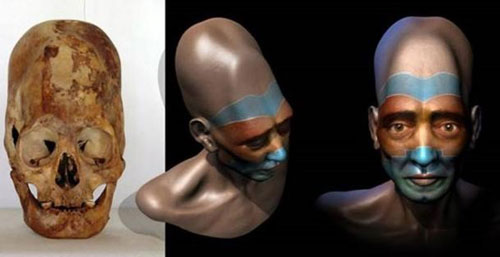 The elongated skulls of Paracas in Peru caused a stir in 2014 when a geneticist that carried out preliminary DNA testing reported that they have mitochondrial DNA “with mutations unknown in any human, primate, or animal known so far”. Now a second round of DNA testing has been completed and the results are just as controversial – the skulls tested, which date back as far as 2,000 years, were shown to have European and Middle Eastern Origin. These surprising results change the known history about how the Americas were populated.

From the samples, only the mitochondrial DNA (DNA from the mother’s side) could be extracted. Out of four hair samples, three showed a Haplogroup (genetic population group) of H2A, which is found most frequently in Eastern Europe, and at a low frequency in Western Europe (one sample couldn’t be sequenced). The bone powder from the most elongated skull tested came back as T2B, which originates in Mesopotamia and what is now Syria – the heart of the fertile crescent. If these results are confirmed through further tests, it means that peoples from Europe and the Middle East migrated to the Americas long before it is conventionally believed.