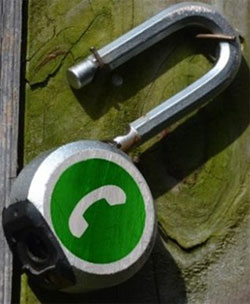 The hugely popular mobile messaging app WhatsApp has a vulnerability that allows third-party snooping on its encrypted platform.

The end-to-end encryption that the Facebook-owned company is famous for providing could be intercepted by a middle-man through a vulnerability that creates a ‘backdoor’ into the security system of one of the most widely used chat apps in the world.

“Fears over users’ privacy were sparked after Tobias Boelter, a security researcher at the University of California, Berkeley, discovered a backdoor in WhatsApp’s method of end-to-end encryption. The encryption technology was added last year (2016) to ensure that no one – including the company – can read a user’s messages other than them.”

It means the company could intercept messages sent to phones that aren’t connected to the internet and forward them on to a separate device without the sender or receiver knowing. The messages could still be sent to the intended device, leaving users that don’t have security notifications switched on completely unaware.

“If WhatsApp was asked by a government agency to disclose its messaging records it can effectively grant access due to the change in keys” Boelter told the Guardian.

The vulnerability, which is unique to WhatsApp rather than the Signal security protocol it uses, can also be used to retrieve entire message transcripts, Boelter said. This is particularly worrying for activists, journalists and regular citizens living in oppressive countries.

“Some might say that this vulnerability could only be abused to snoop on ‘single’ targeted messages, not entire conversations. This is not true if you consider that the WhatsApp server can just forward messages without sending the ‘message was received by recipient’ notification (or the double tick), which users might not notice. Using the retransmission vulnerability, the WhatsApp server can then later get a transcript of the whole conversation, not just a single message.” 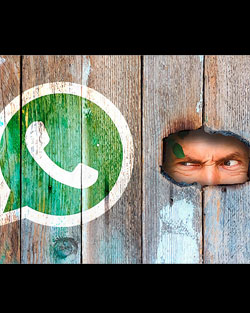 Boelter told Facebook about the flaw last spring (2016), but the company said it was “expected behaviour” and has not attempted to fix it.

Experts said the findings were “serious” and “alarming” at a time when governments are looking for ways to bypass encryption, and criticized the company for violating users’ privacy.

“The potential for government abuses from this misuse of encryption with WhatsApp is alarming,” said Kevin Bocek, chief cyber security strategist at Venafi. “This is a serious vulnerability.”

Bocek urged companies to put systems in place that protect cryptographic keys quickly when needed. “This is critical at a time when governments worldwide are attempting to break down and intrude on the use of encryption to protect privacy, a basic right for people worldwide.”

WhatsApp said it implemented the backdoor to make it easier for users, with the most common reason for security codes changing being when a user switches their device or re-installs the app.

“In many parts of the world, people frequently change devices and SIM cards” the company said. “In these situations, we want to make sure people’s messages are delivered, not lost in transit.

WhatsApp does not give governments a backdoor into its systems and would fight any government request to create one. The design decision prevents millions of messages from being lost, and WhatsApp offers people security notifications to alert them to potential security risks.

WhatsApp published a technical white paper on its encryption design, and has been transparent about the government requests it receives, publishing data about those requests in the
Facebook Government Requests Report.”

How to protect your messages

WhatsApp users can alter their settings to receive an alert whenever there is a change made to encryption. This means that they would get a notification if one of their messages was redirected to a device with a different key. To set up encryption warnings go to Settings →Account → Security → Turn on Show security notifications.

Another option is to use other messaging apps that boast more secure encryption, such as Signal.

Mental health related deaths have skyrocketed over 50% in last 3 years – what’s behind the surge?