Proof of aliens? Researchers claim ‘giant hand from cave’ could be extra terrestrial 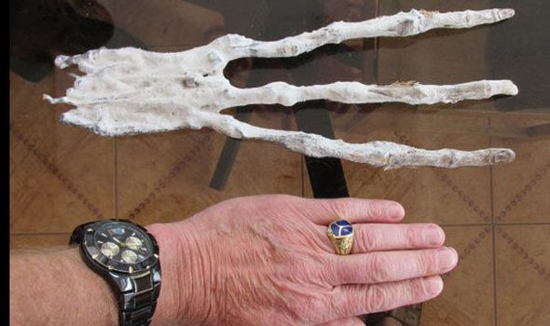 Brien Foerster, of Hidden Inca Tours, and his team claim to have been given the three-fingered specimen by a group of cagers who were exploring desert tunnels in southeastern Peru.The explorers said it was found near a strange elongated humanoid skull that was also given over.
There have been instant claims that the items are hoaxed, particularly as the group would not give exact details about the location of the finds.
But Foerster, who obtains an unusually high amount of mysterious specimens, which it is claimed could originate from aliens, believes it is a genuine sample.

Foerster said he examined the hand in Cusco, Peru, and that he thought it came from a real creature.
He says X-rays were taken of the objects, which showed the fingers on the hand each had six bones, instead of the three in a human finger.
Unnamed physicians said the hand and skull were “biological objects”, with “real animal bone and skin tissues”, he claimed.
They also concluded the hand was not human or from any known animal on Earth, it is alleged.

He said: “It was X-rayed and examined by physicians here in Cusco who stated that it clearly was not a human, but was a life form of some kind.”
Foerster’s group said radiocarbon and DNA testing of the objects were also planned.

Scott C. Waring, an unconnected alien hunter based in Taiwan, discussed the allegations on his website ufosightingsdaily.com.
He said: “DNA results will only say the DNA doesn’t match any known species. The ‘alien hand’ allegedly found in Peru compared to a human’s. We have no aliens to compare it to. Sure there is a skull, but it looks to be the size of an infant, if it is the same species as the hand.”

He believes aliens exist on Earth and speculated over the finds.
He added: “Several different kinds of aliens may have been working together and died in the Cusco cave tunnel where it was found.”
But there have been mixed reactions to the suggestions.
One YouTube viewer said: “Truly amazing. It makes you question the whole idea of life and how it evolved.”
Others called “hoax”.
Another viewer of a video about the claims said: “Maybe someone attached human fingers on top of a fin.”
Some ridiculed the claims of real scientists being involved. 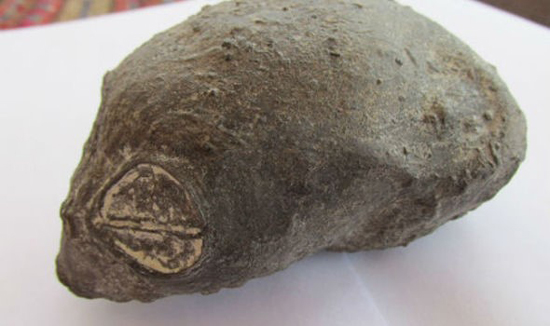 One posted: “Yeah, lets examine this interesting piece of alien evidence in the middle of my kitchen without any kind of environmental contamination measures or proper tools, just bare handed. But, oh, don’t forget the gloves and coat, we are scientists.”

At the time the skull was said to be found with a small allegedly mummified humanoid-like body and sent for DNA tests.
Foerster has come under much scrutiny from sceptics in the past.
He was involved in DNA tests, which allegedly confirmed the 3,000-year old Paracas elongated skulls did not have human DNA. But he has been reluctant to release details of who carried out the tests.
The Paracas skulls have long been held up by UFO hunters as evidence of ancient alien visitations due to their extraordinarily huge foreheads. They were discovered on the desert peninsula of Paracas, on the southern coast of Peru, by native archaeologist Julio Tello in 1928.

Scientists say it was the most extreme example of skull elongation, a deformation practice carried out by several ancient cultures by binding infants heads through pieces of wood, ever found.
Sceptics were not convinced by the “genetic research” news of which was released via social media rather than through a scientific journal as is the norm. Some even concluded the research findings were just an elaborate hoax.
Suspicions were also raised when the identities of the scientists involved were not released.

Research by sceptics later uncovered that those involved had a history of involvement and belief in research into paranormal subjects such as the Yeti and so-called alien hybrids, an alleged cross breed between humans and aliens.
They also questioned Foerster’s impartiality in commissioning the research as the museum is a private, not state venture, he runs tours specialising in pseudo-archaeology and has released a pseudo science book about the skulls.

Later on, Foerster claimed to have found an unusual winged small humanoid corpse in a specimen jar in an office in Mexico.
Claims were made in a video clip online that X-rays carried out on the “dead body” have shown a skeletal structure inside, leading to calls for further analysis, including DNA tests.
But there have been arguments the clip entitled “What is this weird creature with wings in this jar?” could be an online money spinner, because the clip promotes a website where viewers have to pay to see the full documentary.