Use of Oxytocin in Dairy Animals and Its Harmful Effects (1) 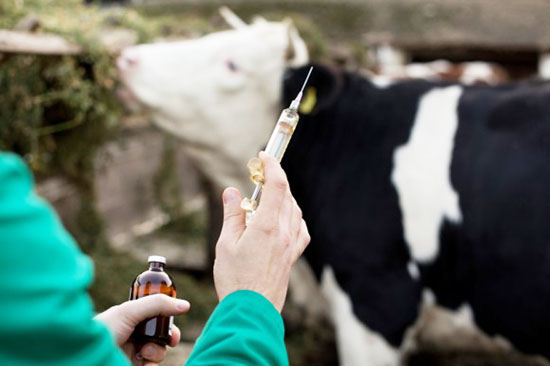 Oxytocin is a hormone released from anterior pituitary gland in animals as well as human beings. This hormone is protein in nature and it is transported through blood from the site of release to the site of action. Physiologically this hormone is important for milk let down as it causes contraction of smooth muscle cells surrounding the milk producing cells called as “alveoli” and also helpful in birth as it causes contraction of smooth muscles of uterus to expel the fetus outside the body of the mother.

Misuse of oxytocin by farmers

In Pakistan, unfortunately oxytocin is being used blindly by farmers living in villages for milk let down in their animals without knowing its harmful effects on their animals. Farmers are using oxytocin injection before milking almost twice a day in cattle and buffaloes for this purpose. The purpose of using oxytocin injection in their animals by the farmers is to get more milk and hence, to get more profit after selling more milk to people but they don’t know its harmful effects on animals. The farmers are using oxytocin without the veterinarian’s advice and the purchase of oxytocin does not require any prescription and is easily available even on a general store of villages. It is widely being used in the dairy industry despite there being a ban on its sale, except by a prescription from a registered medical practitioner.

The use of oxytocin in animals in unethical because the use for milk let down is painful to animals as the action of hormone causes the uterus of the cattle to contract, causing immense pain. Oxytocin is banned under Section 12 of the Prevention of Cruelty to Animals Act (1960), the Food and Consumable Substances Adulteration Act and the Drug Control Laws – it cannot be sold without a prescription from a registered medical practitioner. The law clearly bans the “introducing (of) any substance into the female organ of a milk animal with the object of drawing off from the animal any secretion of milk”. However, this drug is mostly used on cattle through direct injection.

Not only this drug makes cows barren sooner but also lowers the lifespan of the animal, thus causing economic loss to the owner in the long run. The frequent use of oxytocin in animals also cause decreased birth rate, low quality of milk produced and animals culled earlier. Medical experts have pointed out that use of the sustained use of drug can cause hormonal imbalance in animals and harms the reproductive system of animals, reducing their lifespan. Oxytocin use for milk let down also increases the chances of mastitis (locally called as “saroo”) because sustained use for milk let down may cause damage to milk synthesizing cells.

Humans are at risk

There are many adverse effects on humans due to consumption of milk obtained from animals subjected to oxytocin injections. Medical experts have pointed out that use of the drug can cause hormonal imbalance in humans. Due to hormonal imbalances created by exogenous source of hormones like oxytocin in milk and dairy products, the age at which girls attain menarche has come down drastically from 16 years of age to 10 years of age. Boys have been diagnosed with gynecomastia (breast enlargement). It is very harmful for humans who unwittingly are made to consume an artificially created hormone.

Humans face all the harmful effects of this drug. Children are most susceptible to its effects and it is known to have caused imbalanced hearing and weak eyesight. Common symptoms are exhaustion and loss of energy. Pregnant women should avoid milk that may have been adulterated with oxytocin because use of such milk by the pregnant women may lead to abortion and babies may be born with deformities and low resistance levels. Use of such milk also increases the risk of hemorrhage in mothers after birth. Individual women may be hypersensitive to oxytocin and it can inhibit breastfeeding. Oxytocin seriously affects the growth of hormones especially in females because of which minor girls attain early puberty. After oxytocin is injected into the cow, and the milk produced is consumed immediately by pregnant women, then there is the likelihood of abortion but if milk is boiled properly prior to use then this can be avoided.

– Use of oxytocin in dairy animals for milk letdown should be banned in rural as well as in urban and peri-urban areas and stringent monitoring policy should be designed and implemented.
– Oxytocin should not be available without the permission of veterinary practitioner. Farmers should be educated about the adverse effects of oxytocin use and proper platform should be provided to livestock extension departments for this purpose.
– Strict action should be taken against the illegal sellers and buyers.

Below, we present a meaningful study on the use of oxytocin, authored by researchers Nina Marsh, Dirk Scheele, Justin S. Feinstein, Holger Gerhardt, Sabrina Strang, Wolfgang Maier, and René Hurlemann in August 2017. The study was peer-reviewed, prior to be published, by Bruce S. McEwen, from The Rockefeller University in New York. Use full discernment while reading, some excerpts are utterly mind-blowing! The study seems to be an NWO manifesto, promoting the use of oxytocin in order to implement more docility in common sense, reasonable citizens and thus turn them into complacent “cattle”! 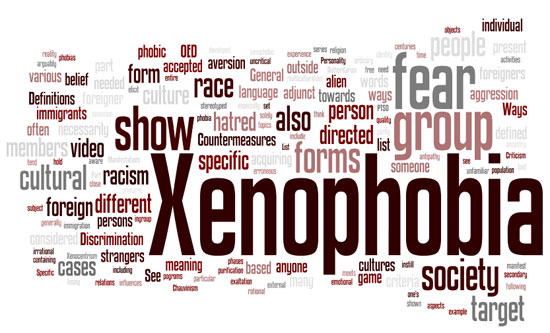 In the midst of rapid globalization, the peaceful coexistence of cultures requires a deeper understanding of the forces that compel prosocial behavior and thwart xenophobia. Yet, the conditions promoting such outgroup-directed altruism have not been determined. Here we report the results of a double-blind, placebo-controlled experiment showing that enhanced activity of the oxytocin system paired with charitable social cues can help counter the effects of xenophobia by fostering altruism toward refugees. These findings suggest that the combination of oxytocin and peer-derived altruistic norms reduces outgroup rejection even in the most selfish and xenophobic individuals, and thereby would be expected to increase the ease by which people adapt to rapidly changing social ecosystems.

Never before have individuals had to adapt to social environments defined by such magnitudes of ethnic diversity and cultural differentiation. However, neurobiological evidence informing about strategies to reduce xenophobic sentiment and foster altruistic cooperation with outsiders is scarce. In a series of experiments settled in the context of the current refugee crisis, we tested the propensity of 183 Caucasian participants to make donations to people in need, half of whom were refugees (outgroup) and half of whom were natives (ingroup). Participants scoring low on xenophobic attitudes exhibited an altruistic preference for the outgroup, which further increased after nasal delivery of the neuropeptide oxytocin. In contrast, participants with higher levels of xenophobia generally failed to exhibit enhanced altruism toward the outgroup. This tendency was only countered by pairing oxytocin with peer-derived altruistic norms, resulting in a 74% increase in refugee-directed donations. Collectively, these findings reveal the underlying sociobiological conditions associated with outgroup-directed altruism by showing that charitable social cues co-occurring with enhanced activity of the oxytocin system reduce the effects of xenophobia by facilitating prosocial behavior toward refugees.

At this time, we are witnessing one of the largest movements of refugees since the end of World War II. Ongoing conflicts, persecution, and poverty in the Middle East and Africa have continued forced displacement of more than 65 million people since 2015. Accommodating the large influx of migrants not only challenges the humanitarian capacities of European countries but also requires their native populations to adjust to rapid growths in ethnic diversity, religious pluralism, and cultural differentiation. However, the impetus to adapt to changing social ecosystems is susceptible to considerable interindividual heterogeneity. Resistance to this transition often goes along with xenophobic sentiment, and as a consequence, recent elections in Europe have favored populist candidates who have openly expressed xenophobic attitudes toward refugees. However, at the same time, volunteer work for migrants in the hosting countries has reached all-time highs and is estimated to exceed 1.6 million hours per month in Germany alone. In the face of growing tensions over differences in ethnicity, religion, and culture, there is an urgent need for devising strategies for helping foster the social integration of refugees into Caucasian societies.

As a result of evolutionary selective processes, humans possess a genuine propensity to contrast ingroup members (“us”) from outgroup members (“them”). This dichotomy is adaptive, as ingroup members could not have survived and reproduced without altruistic cooperation [i.e., the goodwill and reciprocity of other ingroup members]. Only recently has neuroscience begun to dissect the biological components of altruistic cooperation and identified oxytocin (OXT), an evolutionarily conserved peptide signaling pathway originating in the mammalian hypothalamus, to be a key modulator. These insights could be gained because intranasally administered OXT (OXTIN) penetrates the brain and alters measures of neural and behavioral response. Specifically, OXTIN has been revealed to enhance social cooperation, generosity, and empathy; to induce an altruistic response bias away from nonsocial toward social priorities; and to reinforce parochial preferences for outgroup hostility and ingroup centricity. Consistent with the latter are findings from field studies of wild chimpanzees showing that heightened endogenous release of OXT correlates with greater ingroup cohesion during intergroup conflict. Furthermore, OXTIN facilitates social norm conformity. Social norms, and personally costly sanctions against defectors of these norms, an inclination defined as altruistic punishment, may have evolved to protect ingroup biases from erosion through selfish motives.

The biblical parable of the Good Samaritan (Luke 10:25–16:17) describes an ethical maxim of helping strangers who have fallen in need. As such, it not only captures the essence of altruistic behavior by emphasizing the personal costs of selflessness toward others but also represents a formidable example that norm-enforced altruistic cooperation is by no means limited to the ingroup, but can even extend to outgroup members in ways neither precisely understood nor systematically researched. Here, we hypothesize that normative incentives co-occurring with enhanced activity of the OXT system exert a motivational force for inducing altruism toward strangers even in the most selfish and xenophobic individuals. To specifically test this hypothesis, the present study was devised to examine social norms, administered in the presence vs. absence of a norm-enforcing treatment with OXTIN, for their efficacy to promote altruistic responses in subjects scoring high on a xenophobia inventory.